As I sit here on my balcony penning this article, suffering from a mild dose of man flu with a serious shortage of handkerchiefs (YUK!), and taking in the news of the passing of that golfing legend Mr Arnold Palmer, thoughts take me back to Saturday, September 17th  the day of the final round of the Golf4Fun tournament series of 2016.

Ever since the record time set by the burning of the snowman, wet weather gear had featured at a number of events this season, and the weather forecast for this event did not look promising. However, I had prepared diligently to ensure that both my clubs and I stayed relatively dry, even down to the purchase of a new golf umbrella from the pro shop on the day. As it transpired the CHF 65, as well as the CHF 5 birdie pot contribution turned out both to be unnecessary expenses, with the clouds parting and some autumnal sunshine greeting us on the first tee.

Today we were playing the Green and Yellow combinations of nine and the heavy rain the course had taken on the previous day made playing conditions a tad juicy.

At the starter`s hut helpers Colette, Nata , Dawn and head honcho  Nora were there to oversee the handing out of goodies from our sponsors Stamford, Swiss, Ultrasun as well the mid round snacks and Focus Water  (golf4fun members benefit from an online discount – ask Nora for the details). Also on show was the generously donated Match Manu prize for those that managed to post a score of 32 points. Nora also informed us that there was a vast array of prizes up for grabs which certainly helped to focus the mind. 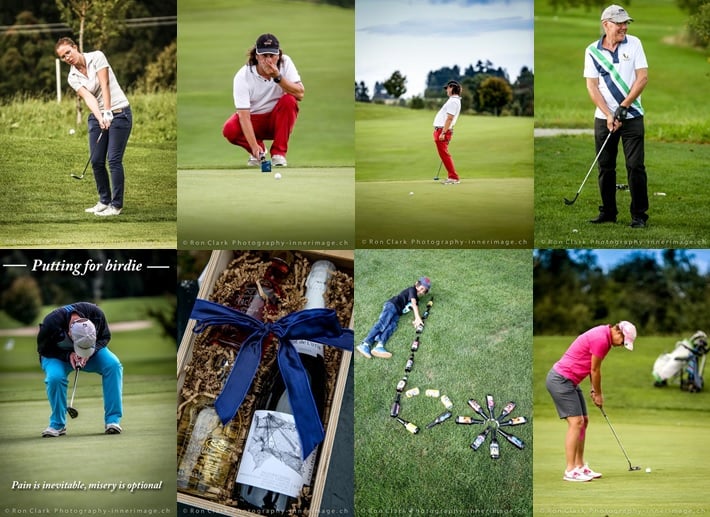 There was sure to be some good golf out there today, with a few players hot back from a week’s sojourn in Bulgaria , and having played Thracian hills , the Waldkirch layout should prove an easier test. A return visit to the Black sea I am informed is planned within the next few years, so don’t forget to check out the website for more details when available.

There is a golden rule that Nora always tells us, that if you’re not sure you will find your ball always play a provisional. This golfer took out the big stick, hit it down the right. Unfortunately, the ball was not to be found resulting in me having to run back to the tee , play my third and run back to join my flight. Having reached my mid 50s and being a smoker, the cardio vascular system was struggling, and the resultant blob was testimony to this. Indeed it took another couple of holes to recover before tackling the mountainous 4th.

As we approached the tee box on this Alpine, dog leg par 5, a ranger was to appear, sporting a very bright flaming red hair do, and a voice to match. The presence of this Boadicea did little to calm our nerves and the resultant drives were not ones you see on the PGA tour.

The 5th hole Par 3 gave us the chance to win the Raleigh E bike, which was proudly displayed in the club house reception, but for today it would stay there to be wheeled into 2017. 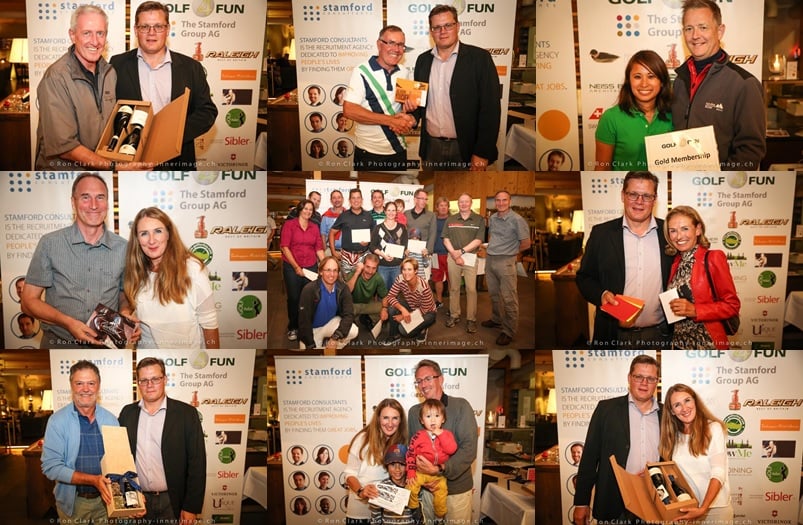 We soon reached the Ninth, and nearest the pin, as it turned out, to be eventually won by our Ron of Inner Image, who birdied his 1.35 meter attempt. Ron has posted such great photos of our events over the past few seasons, but alas this will likely be the last time he will be offically capturing the various emotions of the players as they finished their rounds on the 18th, although he will be playing in the tournaments in 2017.

Having played the Green 9, we yomped the considerable distance over to the first on the yellow course. This was to prove an eventful group of golf holes , with this golfer managing shortest drive of the day as I managed to propel my Titleist pro v1 all of 2 cm outside the tee box. Quite an achievement for a 6 iron. 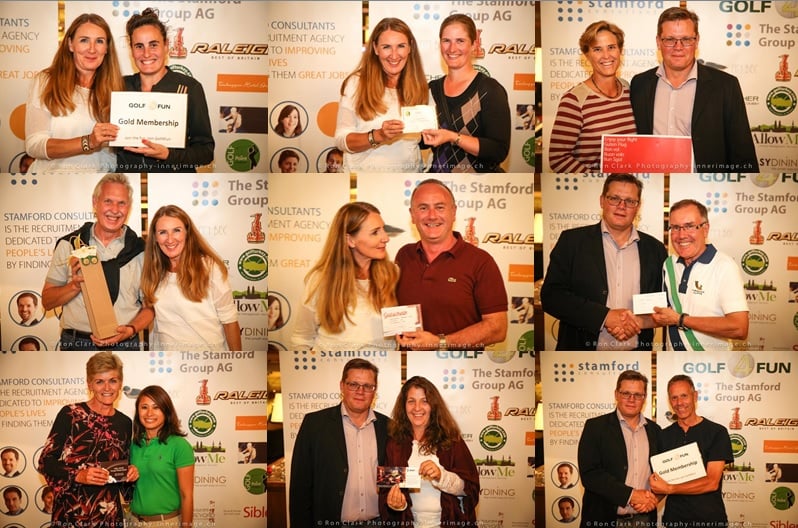 Then onto the longest drive hole, and quite a bizarre outcome was to unfold. The marker for the men’s competition had been placed a long way down the hole, obviously expecting someone called Bubba or Phil to reach it, but as it turned out no one was to reach it and so no one placed their names down , resulting in no claimers for this award. Nicole, from our Main Sponsor Stamford proved to be victorious in the Ladies competition.

As we came down the 18th Par 5, I had calculated a birdie would be enough to secure my chances of qualifying for the Fin Bec challenge, and the Match Manu prize.

A 10 meter downhill, right to left putt, however, proved too much, although very close to secure par, but just one point shy!! 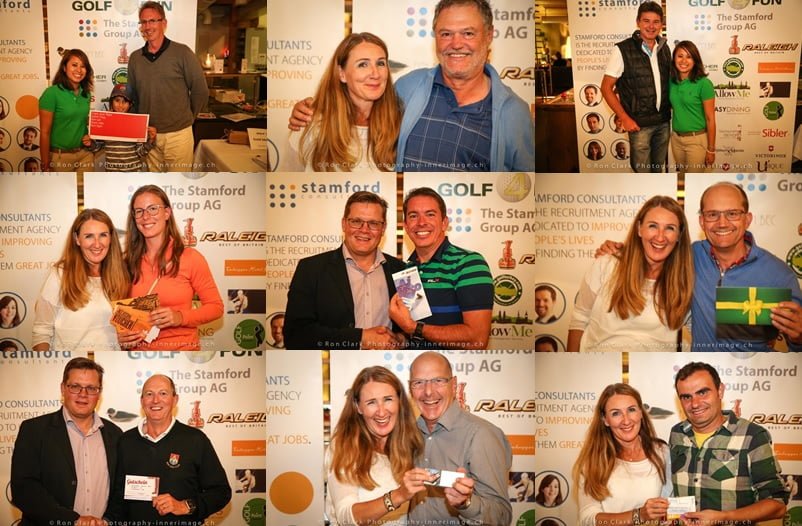 Another one our generous sponsors the International Beer bar in Zürich, had provided us with a selection of their brews behind the 18th, and more than welcome after a rather warm and humid round.

Back to the clubhouse, and to meet the charming Khrisna Canares , Director of Sales from the Tschuggen Hotel Group, who informed us of details of their variety of 5 * hotels and of a new development in Arosa. The group had generously donated some spectacular Hotel and Spa Experiences to the prize pool, as well as handing out bags of novel giveaways for the players on the day.

Just next to Khrisna, Dawn was busily selling the very popular Golf4fun polo shirts, that come in a number of bright and exciting colours. She even managed to twist the arm of one of my flight members to purchase one.

Showered and changed and with the last of the flights coming in it was soon Apéro time. A mouth watering spread laid on by the Waldkirch kitchen was quickly devoured by the hungry participants.

Prize giving —A slightly longer than normal affair due to not just the day`s awards to disperse but also those for the overall season`s champions and runners up. I will let Ron’s photos do the talking, but a special mention to Alison and Jay for taking top spots in the Brutto and Netto competitions for the season respectively. Also to Irene for collecting the Rabbits award. Actually our Spanish duo of Carlos and Irene both had a good day , walking away with a number of prizes in the grand raffle. Also not to forget the winner of the 2016 Singles Knock Out Competition —NORA!!

So the 2016 season draws to a close, although there`s plenty going on in the Golf4Fun calendar, with the start of the Indoor golf series and the short game competition at Golf point Urdorf , including Raclette as well as the Christmas raffle.

With 2017 approaching, this golfer will be heading down to the Zürich Golf Centre in October where Adam is having a massive sale of golf equipment and accessories, and I hope to pick up a bargain or two.

There is also the prospect of a week’s golf in February at the prestigious Villa Padierna in southern Spain, and again check out the website for details of that.

Once again, and I cannot say this enough, thanks to all the hard work done by the people in the background(and in some cases very much the foreground) who make these golf tournaments so much —FUN !!